Skip to content
It was not the liveliest of encounters, but England can take heart from a goalless draw against Brazil.

England followed up their stalemate against Germany with another impressive clean sheet as they held five-time world champions Brazil to a 0-0 draw at Wembley.

Gareth Southgate’s injury-hit squad showed their dedication to defending with a stoic display on home soil, leading to the first scoreless encounter between the nations in 40 years.

The always busy Neymar did his best to light up an otherwise dim spectacle but, despite dominating for long periods, Brazil struggled to cut open an England team that saw Joe Gomez impress as a centre-back in the new 3-5-2 system.

Southgate handed a debut to Gomez’s Liverpool team-mate Dominic Solanke off the bench in the second half, but a team minus Harry Kane barely threatened to cause an upset in the capital. 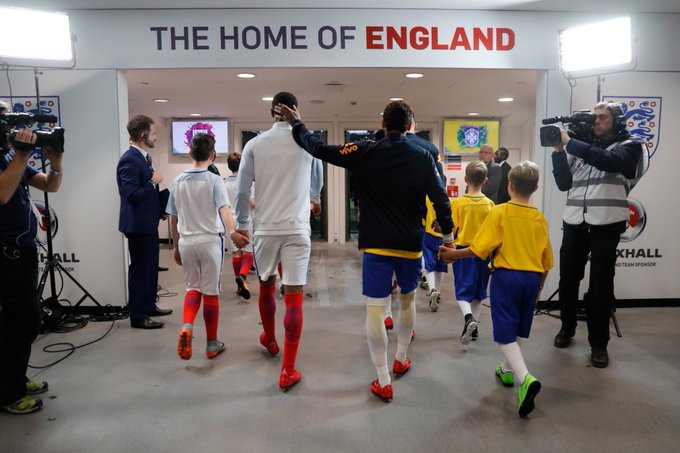 England had given cause for optimism with their performance against Germany, and Southgate once again stuck with the three centre-back policy he had tested out last Friday.

Gomez was handed a first start and Ruben Loftus-Cheek kept his place in the team, albeit his involvement was ended after only 35 minutes by a back injury.

Brazil, who welcomed back Philippe Coutinho from a thigh injury, bossed possession in the first half without turning their dominance into clear-cut chances.

Joe Hart was needed to make a save from a Gabriel Jesus header, but the tempo of the game struggled to match the occasional noise stemming from the samba band inside the stadium.

75 – Joe Hart made his 75th appearance for England tonight, just the third goalkeeper to reach this total after David Seaman and Peter Shilton. Stalwart.

Marcus Rashford produced England’s brightest moment before the break, the striker – occupying the central role he has played for Manchester United recently – cleverly turning away from Casemiro before sending a firm drive straight at Alisson.

While the chances failed to arrive early in the second half, yellow cards for Jake Livermore and Dani Alves at least showed there was a competitive edge to proceedings.

Brazil saw Hart block Coutinho’s weak attempt after the Liverpool playmaker had outpaced team-mate Jesus to reach Neymar’s scooped throughball, only to then stumble and lose his balance at the point of contact.

Tite utilised the Premier League pairing of Willian – who had captained his country in the 3-1 win over Japan in France – and Fernandinho off the bench in the hope of sparking his team into life.

Both replacements had late opportunities to break the deadlock, with Fernandinho whistling a shot just wide of the target before Willian saw his goal-bound effort blocked by England substitute Ashley Young.

Solanke made his introduction in the 73rd minute and had the chance to mark the occasion with a dramatic winner from Young’s cross in the closing stages.

However, teed up by fellow sub Tammy Abraham, the striker waited a fraction too long to get his shot away, allowing the alert Alisson to make the block at the far post.

While England could not quite nick it at the end, they could at least reflect on back-to-back shut-outs against the top-two ranked teams in the world.